As a fourth grader, I was introduced to Adventure and other text-only computer games by our school principal, who dragged six of us down to his office to see the TRS-80 he probably spent his entire day messing with, rather than breaking up fights or firing lousy teachers or whatever else a principal is expected to do, but doesn’t. I’m glad he didn’t. I think he might have been day drinking.

More than a few recent novels have been trafficking in the same spare, fable-like settings that dominated early modem games like Colossal Cave Adventure, or Zork. 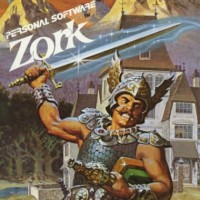 I’m not talking about dystopian novels. I’m not complaining, either. The dystopian novel is becoming passé, especially as those with institutional power increasingly realize what the historically disenfranchised have always known: all dystopias is local.

But let me step back, grab a machete, and clear a better path.

I no longer question these games’ influence, but instead wonder whether the author is conscious of their influence or not. Richard Powers has written directly about early modem games. Ernest Cline’s Ready Player One, while set inside a future’s virtual reality avatar-like world, works as a quest, complete with references to some of the earliest text quest games. I’d bet my left shoe Cline logged oodles of hours on a Radio Shack machine before he was old enough to drive.

As far as novelists possibly unaware of text games’ influence on their work, I offer Haruki Murakami, whose work (with a few exceptions) trades in the same vague surrealism found in modem games, although his plots (for lack of a better word) operate with the non-logic of dreams. W.G. Sebald‘s novels read like hyper-detailed, hyper-logical versions of quest plot lines,

some with stunning resolutions, as in his Austerlitz (as far as the current second wave of Sebaldies going all fiction-as-personal essay, like Ben Lerner, or Rachel Cusk: another time.) Jim Crace‘s Harvest and The Pesthouse seem like tributaries of the same storytelling ideal, lacking in specific historic signposts and following a pastoral migration of humans while chronicling the losses they’ve succumbed at the hands of blunt circumstances. It’s no surprise Harvest occurs in a pre-industrial, agrarian England, while The Pesthouse takes place in a post-industrial, agrarian, post-apocalyptic somewhere. Crace remains a whiz at pastoral dystopia when he feels like it, as he’s done in Continent and Arcadia, and at his overall best in The Gift of Stones.

But that’s all hindsight. So what’s driving me to long form comment on this whispering genre (Fable Lit; Looking Glass Lit; Adventure Lit)? Writers like Jesse Ball. A practitioner of stateless fiction, for whom a surreal setting might be considered a character itself, or might not matter at all, Ball has established himself as the M.C. Escher of identity crisis. Although fascinating, A Cure for Suicide (2015) seemed crushed by the weight of the strife caused by a future that repeatedly erased the identities of the mentally ill, as they relapsed, without any true cure. Ball is primarily a poet, or, to me, always a poet, even in the guise of his novels. The Curfew (2011), set in an unnamed totalitarian state, disappointed with its oh-so slight specificity of setting. Ball’s crowning work remains Samedi, The Deafness (2007), which ostensibly concerns being institutionalized but launches a deep attack on all forms of confinement, as characters inhabit a facility that physically grows with them and back in on them, like a sentient Winchester House, as they seek to escape. Ball seems to say we are punished for being limited to a single consciousness, the confines of which only intensify if we attempt escape. Of course. But a novel? Good one. A poem without line breaks.

With a setting (mid-19th century Europe?) that can only be deduced as an afterthought from available clues (an absence of most industrial technology except for trains) Patrick DeWitt’s UnderMajorDomo Minor begins in quest fashion.

In a straight lift from picaresque novels, our titular and naive hero faces paths chosen or not chosen, all leading to a castle in disrepair, thieves, a love story, cavern tunnels to be escaped by deduction, and so on. DeWitt crossed Colossal Cave Adventure with Barth’s Sot Weed Factor.

In his acknowledgments, DeWitt goes as far as to state he “considered the works of Thomas Bernhard, Ivy Compton Burnett, Italo Calvino, Dennis Cooper. Robert Coover, Roald Dahl, JP Dunleavy, CF, Knut Hamsun, Sammy Harkham, Werner Herzog, Bohumil Hrabal, Shirley Jackson, Par Lagerkvist, Harry Mathews, Stephen Millhauser, Jean Rhys, Robert Walser, and Eudora Welty.” DeWitt is dead-on correct about Calvino, Herzog, Jackson, some of Millhauser, some of Coover, and Hamsun, being obvious influences on this work. I wasn’t surprised to read that DeWitt has stated in interviews that UnderMajorDomo Minor was written as a reaction to the internet, and its “nihilism.” It would make sense to return, even unconsciously, to the basic days of text games, that wild yet simple environment of promise and discovery before the relentless data-beast we know today took over our lives and minds.

As far as the unrecorded history historical novel goes, Kazuo Ishiguro’s The Buried Giant buries them all. Don’t see it as a “departure,” as the New York Times did; Ishiguro usually genre hops, from Victorian novel of manners to science fiction. He almost never disappoints, and when he does, he says so. That Ishiguro’s foray into dystopian lit, Never Let Me Go, preceded The Buried Giant, is telling – The Buried Giant drops many dystopian elements into a pre-recorded history British countryside that doesn’t reveal itself set as years after the fall of Camelot until the narrative encounters a bedraggled, elderly member of the defunct Arthurian round table, wandering the countryside quest-less and possibly ill-intentioned. As with most of his work, Ishiguro investigates memory and identity, and love. An elderly couple, their memories blanked by a mysterious, possibly metaphoric mist plaguing their community, set out in the greater English wilderness to find their son. Who may or may not exist. One brilliant conceit of Ishiguro’s novel is how much of what seems fantastic (ogres, dragons, the memory mist) might be debunked by the reader’s more modern modes of understanding (Vikings; foreign animals; poor diet) without lessening the riveting oddness of the primary characters’ descent into a lawless England. At times, they travel in circles. They think in circles. Like text games, The Buried Giant seeks to imbue itself with your perceptions while it’s about perception. As in: Where you go is based on how you think or think you see the way. As in: Wherever you go, there you were.