Listicles are: legion. We’ve reached the post-listicle age. Listicles about listicles are all that’s left for writers feeding the internet beast at 10 cents a word.

As far as the “authors appearing in films of their own works” listicle, the obvious suspects appear in almost every piece. Stephen King hams it up as a dingbat in a host of his works, from Creepshow to Pet Sematary. We’re clear on SE Hinton’s cameo as a nurse in “The Outsiders.” We know Blatty’s silly turn in the Exorcist; Sapphire in Precious; Benchley in Jaws, Bukowski in Barfly, and my two favorites: Hunter S Thompson in Fear and Loathing , and Vonnegut in Mother Night. In both of those cameos, each author not only appears in movies of their own work, but visibly faces and recognizes himself as portrayed by an actor.

You don’t often see Stan Lee listed (yeah, the word ‘author’ fits him) showing up in: everything. I show the following only because it includes a rare appearance where Frank Miller plays himself, too:

Nor will you read much about Jean Cocteau showing up in movies of his own novels and plays, mostly because he was making those movies himself, and starring in them as the title character. It’s also unfair because he could do everything. Cocteau was annoying like that. To go full-on old school, Samuel Beckett pulls a cameo in a film he wrote for Buster Keaton.

The near misses are also fascinating. Dorothy Parker almost appeared in Hitchcock’s “Saboteur,” in addition to co-writing the screenplay, but ended up on the cutting room floor.

Of course, writers also frequently play themselves in works not their own. Michel Houellebecq, who had a legit cameo in his own “The Possibility of an Island,” recently appeared in a movie by someone else, as himself, about himself, and it wasn’t a documentary (got that?). Truman Capote’s cameo in Annie Hall ranks among the best, as his quick appearance is addressed with the line “There goes the winner of the Truman Capote look-alike contest.”

Nonetheless, Capote did participate in a film of his own work, which you’d think was less rare than it was, given his amplified personality (and starring role in Murder by Death). In 1967, he narrated the TV version of his “The Thanksgiving Visitor.” He did not slur. Possibly they recorded before noon.

Most of all, don’t sleep on “The Player,” a novel first, then a screenplay, both by Michael Tolkin. Tolkin and his real life brother appear in the film version as filmmakers pitching an exclusive relationship to Robbins in a nightclub, roles supposedly based on the Coen brothers. I gave up finding a clip online; maybe that’s why this one never appears in listicles. Ironic, that, this being “The Player.” Same goes for finding a clip of Tom Perrotta’s cameo in an episode of the Leftovers. As for his turn in Ruby Sparks: no.

In the vein of “The Player,” yet not a satire in any sense, Terrence Malick’s recent “Knight of Cups” includes Bruce Wagner in a cameo role as a chauffeur running a Ketamine party. Wagner didn’t write “Knight of Cups,” but he’s billed as “Bud Wiggins,” a character he invented for his fascinating first novel, “Force Majeure.” Wagner plays Bud once again in Cronenberg’s recent “Maps to the Stars” which was written by Wagner. Wagner might be best known in the visual world for creating the series Wild Palms, yet most of his ten novels are so fine as to justify a higher literary profile for Wagner. It’s hard to think of an American novelist who’s done a better job putting the entertainment industry on the literary page. History will be kind to his work.
Plus, Wagner was great in Savage Steve Holland’s “One Crazy Summer:”

Another favorite cameo, rarely included in listicles: Paul Auster’s turn in the last scene of the film version of his novel “The Music of Chance.” It’s the movie’s only real diversion from the novel, and it’s a huge diversion, although the novel’s ending, as it was on the page, probably would have ended any chance of getting the movie produced. Up to that moment, though, the perfect casting of Charles Durning, Christopher Penn, James Spader, Joel Grey, M. Emmet Walsh, and Mandy Patinkin delivers a fine adaptation of the book, to the point where I heard more than one reader of the novel, me included, admit the movie uncannily matched the images in their mind. Auster also appears in “Blue in the Face,” but that’s not really a cameo, nor based on a novel in particular.
Spoiler alert:

Richard Price ranks as the Alfred Hitchcock of cameos in films based on his own writing. To wit:

Price’s only competition in the rampant cameo department comes from Neil Gaiman. Click for a listicle based only on Gaiman’s appearances.

Of course Susan Orlean had to appear in Charlie Kaufmann’s “Adaptation,” which is both about her book “The Orchid Thief” and his adaptation, of it, into a screenplay.

Only one listicle also ranks James Dickey as a similar cameo. Most authors wouldn’t want to appear in a film version of Deliverance even if they wrote it.

And then there’s Pynchon in “Inherent Vice.” Yes, this shows up in a load of listicles, but I’ve got two updates. One, that’s his voice in a promo for “Inherent Vice,” done by Penguin, and confirmed.

Two, based on a news report that filmed Pynchon in public but then agreed not to specifically point him out, and also based on some long gone pics of him picking up his kid in NYC, I’m almost certain I know where he appears, if he does, in “Inherent Vice.” Until I’m wrong, of course. In the preview below, at 1:08, there’s a scene between Phoenix and Owen Wilson. In the full scene (not in this clip; see the movie), while they speak, a man walks slowly past the window behind them, stops, and moves on. That’s where I call it.

There’s also this. Ask your kids, or someone with kids. 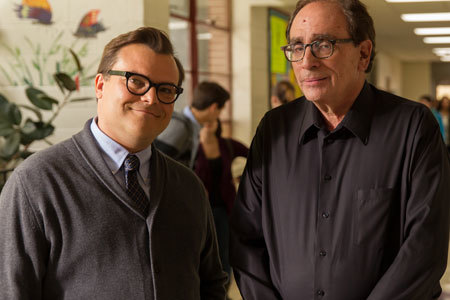